September 25, 2014 By Devereux et Fils in living Leave a comment

As you can see, I’m no longer working on this blog. You can find me (if you want) at my new blog, Bonjour Bicycle.

Are you ready for fall? I know Labor Day has only just passed and a few precious weeks of summer still remain, but I must admit that I do get excited about the leaves turning color, pumpkin pie, and — of course — sweater weather. And what better way to enjoy the changing of the seasons than with Issue 2 of Broadway+Thresher: The Fashion Issue? 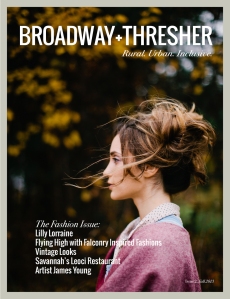 Camouflage is definitely having a moment this fall. And though I’ve always been a fan of utilitarian chic (in fact, I still have an old field bag I bought at an Army surplus store while in high school), I’m nonetheless impressed to see so many new über-chic camo looks. Here are some of my favorites . . .

I love the mix of camo and leopard here. It’s a clash that just seems to work. If you want to try it yourself, check out Sanctuary’s take on the camo sweater.

Edith A. Miller’s mixed media camo dress is a fun way to transition from summer to fall.

Spiked plum heels not only complement these ankle-zip camo skinnies, but create a combo that’s just plain sexy. Elizabeth and James has a similar pair if you want to recreate the look.

Are you ready for the urban jungle?